The only thing stopping you is… 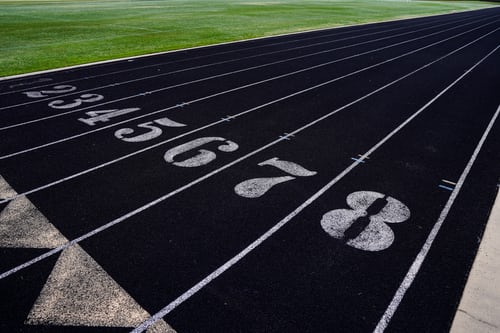 When I was a freshman in high school the varsity track coach saw me run my first 100-yard dash.

I was wearing new track shoes with half-inch spikes for the first time.

It didn't occur to me I should wear the new shoes in practice to get used to them.

The gun goes off and I took one step...

My knees and elbows were full of cinders from the track (we didn't have artificial tracks in the old days).

I jumped up and started running.

I was way behind the pack at this point, but I kept running anyway.

As I crossed the finish line, I was 5 yards ahead of the pack and finished first.

The varsity coach congratulated me and said something I remember to this day.

I was shocked to hear how much confidence he had in me after only one race.

He believed I could be state champ.

Did I believe I could be state champ?

Not when he first told me.

He kept reminding me over and over.

It's all about your mindset.

Sure, there's a huge physical aspect to being state champ.

Even if you are physically capable of accomplishing something, you have to have the right mindset.

Fast forward to my junior year.

The night before the district finals, a local television station featured my main competitor.

Steve Evans was going to be the next state champ.

They showed him practicing for the big meet and talked about his college scholarship offers.

Steve was all but guaranteed to win the district event in the reporter's mind because there was no real competition.

I'm undefeated in the 100 and 220-yard dashes this year and you don't consider me competition?

As we get into the starting blocks for the district finals, Steve is strutting his stuff.

I stayed focused on the race.

The gun goes off and I immediately take the lead.

I held off Steve and the other runners winning the race by two steps, and I broke our school record (the record will stand forever because they run 100 meters now LOL).

I won because I believed I could.

I made it to the Pennsylvania state finals that year finishing 12th.

I was undefeated in my senior year until the state finals where I finished sixth.

I lost to two guys who made the 1976 Olympic team and a running back who went to Penn State.

It all came down to my mindset.

They were a lot bigger and stronger than me (I was a towering 5' 5") but I believed I was in their league.

A few years ago, I met JV Crum III, author of The Conscious Millionaire.

JV invited me to be a guest on his Conscious Millionaire podcast which has over 12 million downloads and is one of the top 12 business podcasts according to INC magazine.

I've been a guest three times on his podcasts and we've become great friends.

JV is all about mindset.

That's why I resonate with his message.

On Wednesday February 16th at 3 PM Pacific/6 PM Eastern, JV will be sharing some of his mindset tips.

See you on JV's webinar!