The November issue of Social Selling Made Easy is available 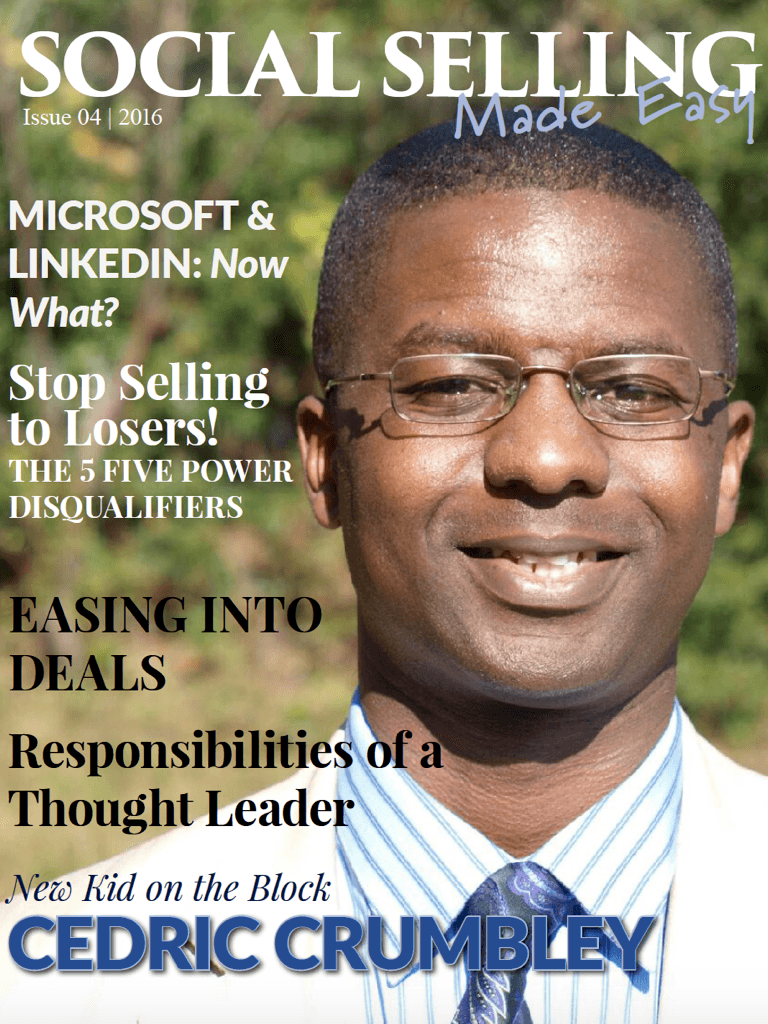 The latest issue of Social Selling Made Easy is available.

This is a very special edition of Social Selling Made Easy. Have you ever watched one of your children graduate from school and begin their career? And their career takes off like a rocket?

This month one of my clients is embarking on his new career. After spending the past 20 years in the US Army, Cedric Crumbley is retiring from the military and beginning a new chapter in his life as a copywriter.

Cedric has been preparing for this opportunity for years. He didn’t wait until he retired from the military to decide what to do with he rest of his life.

Cedric created a detailed plan years ago and he’s been implementing it ever since. He became interested in copywriting and enrolled in an online course at American Writers And Artists Inc. He’s also been following some of the top marketers in the world including Perry Marshall, who by the way is one of this month's contributors.

Perry and I go way back and Cedric heard me being interviewed about LinkedIn on one of Perry’s webinars. After the webinar, Cedric called me and said “I want you to coach me”. That was the easiest deal I ever closed!

Cedric is a dream coaching client. If you’ve never had the opportunity to work with a military person, they are the ideal coaching client. They do whatever you tell them, no questions asked. No excuses. They are trained to do what they are told without question and they do it well.

As Cedric embarks on his new career, I want to honor him for his 20 years of service in the military protecting our country. Cedric is this month’s cover boy and I’m honored to call him a friend, client and now colleague in the world of marketing.

This month I’m mixing it up with a few new contributors.

My longtime mentor and coach, Perry Marshall is sharing his take on social selling. Perry’s article is Stop Selling to Losers! The 5 Power Disqualifiers. When you prequalify your prospects, its so much easier to close deals with them and they are almost always better customers.

Another longtime mentor and good friend, Alex Mandossian, shares Tested Principles of Great Decision Makers. Alex is very focused on measuring your activities and focusing on the actions which produce the best results. It’s his take on the infamous 80/20 principle.

Josh Long is another new contributor this month. Josh is sharing an article about social selling, Unlock Massive Growth: Use the Bottleneck Breakthrough Method to find and fix the #1 challenge holding you back. I know Josh through Planet Perry, which is what Perry calls his community.

Our video training this month is my latest webinar called LinkedIn + Microsoft: What to Expect in 2017 after Microsoft takes over early next year. Microsoft is combining it’s 1+ billion member network with LinkedIn’s 450 million members to create a powerful professional network. You’ll see a preview of the new LinkedIn desktop and mobile apps with use a lot of artificial intelligence to create a dynamic user experience like no other.

In this month’s thoughtleader interview series, Social Selling TV, I interview Steve Olsher, the New York Times best-selling author of Discover One Amazing Thing You Were Born to Do. I read this book a few years ago when it was initially released and I didn’t realize it was the same Steve I met through a Facebook group and at a recent conference. Small world!

Let’s finish the year strong and make 2017 our best year yet!

Why I Never Have Writer’s Block

Why Struggle When You Can Soar with Nancy Tierney