Blab is Officially Dead! Is This the Beginning of the End for Live Broadcasts?

Yesterday Blab was officially put to rest. I enjoyed doing our weekly Social Selling Wednesday Blab but viewership did drop off significantly in the past few months. It's hard to get people to drop everything for a live broadcast in a day where we schedule time to talk with our best friends.

We have so many distractions and our attention span is about 10 seconds these days. Being bombarded with unannounced live video broadcasts doesn't fit with the new model of television where we watch everything on demand or on Netflix when it fits into our schedule.

Here's the official announcement from Shaan Puri. If you want to read the entire announcement visit https://medium.com/@shaanvp/blab-is-dead-long-live-blab-d2f72449ddb8#.30zfun6zp

OK let’s rip the bandaid off:

Today is the last day of Blab. We’re shutting down the website and app, and focusing 100% on our new project.

OK, now that the hard part is out of the way, let’s have some fun.

The upside of ending Blab is that I can be fully candid about what worked,what didn’t, and what’s next.

Alas, things started off so well.

We took a hackathon project that we built in 3 weeks, and grew it from 0 users to → 3.9 million users in less than 1 year.

The average daily user spent over 65 minutes per day on Blab — and most importantly — everyday we woke up to tweets like this:

Those aren’t just good signals, they are great for any 1 year old startup. Yet it didn’t work out. Why?

Because most live streams aren’t interesting enough to justify stopping what they are doing to watch your broadcast.

The struggle with Livestreaming — is that we need to show you something awesome, that’s being made right now.

Turns out, that’s really tough. It killed Meerkat, and Periscope & FB Live are feeling the pain right now. Really, only Twitch has gotten it right with live streaming video games.

In live streaming, the churn is real.

We hoped replays would help, but less than 10% of all watch time was on replays. Why? Because the off-the-cuff, unpredictable nature of livestreams make for terrible replays. The better the live stream was, the worse the replay will be.

For the past 6 months, there has been a growing divide between two groups of users:

2. People who use Blab as a place to go to hangout with friends

It was exciting to see big names like ESPN, The UFC, Tony Robbins, Cisco, Adobe, IBM, SAP, Product Hunt use Blab to interact with their audience.

But the majority of usage came from everyday people “just hanging out”. They weren’t making content, they were making friends.

The best ‘content creators’ used it ~once a week, for ~2 hours. The people who were hanging out with friends used it 5–6 hours per day, every day.

Why was it so addictive?

It was a place to unwind after school or work. Without any scheduling or planning — you could find your friends hanging out on Blab. The lounge was ‘always on’, and the conversation would rage through the night until the sun comes out the next morning.

My team is here for one reason. To build a product that millions of people will use everyday.

Blab was great in many ways, but it wasn’t going to be an everyday thing for millions. So we’re kicking down the sandcastle, and re-building it as an ‘always on’ place to hang with friends.

It’s not ready yet, but we’ll let you know.

#10 — The First Blab— The first Blab ever. Back when we had the 4 column layout and viewers could feel this.

#9 — Global Yoga— Waking up to a “digital yoga” class with people participating from all over the world.

#8 — Crashing & Failing UFC.com embedded us on their homepage for a big announcement, we were stoked. …But -we weren’t ready for the traffic and the stream crashed.

On one hand, he brought in tons of mainstream attention and 100k+ new users himself.

On the other hand, he was a polarizing figure and we had a month long wave of chaos from internet trolls & DDOS attacks.

As much as I try to be a mature adult, I melted every time I saw one of my heroes or mentors using the app.

Whether it was someone from the tech world (eg. Jason Fried Mazzeo Chris Sacca Robert Scoble), the sports world (@espn @UFC) or from the real world (eg. Tony Robbins firewalkScott Harrison)

I loved seeing faces that I grew up watching show up on Blab.

The birth of community traditions.

Huge shoutout to everyone who put their talents on display for the rest of the world to see. 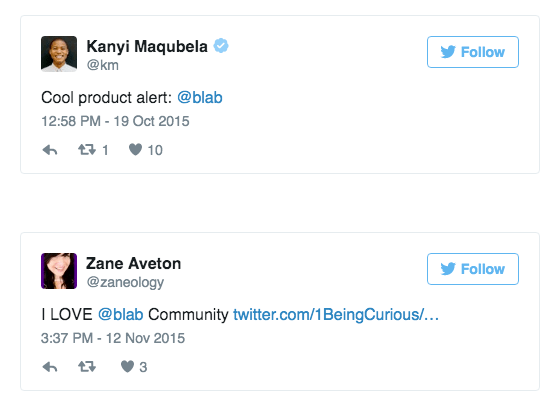 Even when the numbers started off small, we knew it was worth trying because of these tweets. 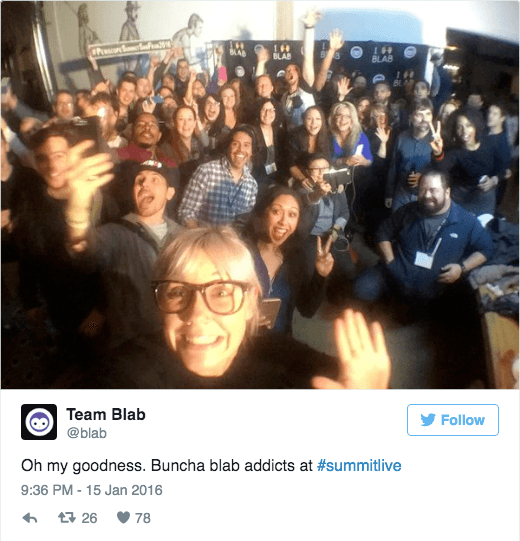 As you know, there ain’t no party like a Blab party.

Seeing hundreds of people fly in from different parts of the world for our meetups was amazing.

You guys rock. Thank you for the good times.

Our team is already working furiously on the next evolution of Blab.

Instead of broadcasting, we’re building an ‘always on’ place where you go to hang with your friends.

Basically, we’re taking what worked —and doubling down on it.

It’s not ready yet, but we’ll let you know when it is.

Wait, why does Blab have to go? Can’t you just keep the site up? Why not charge users — I’d pay for it! Why didn’t you try THIS?? Are you guys stupid, you have a goldmine on your hands??

My team, from our investors down to our interns — came together to build a generational product.